Sally Ride - the first American woman astronaut died on Monday, she was a woman of many accomplishments and achievements, part of her obituary;

"Sally was a national hero and a powerful role model. She inspired generations of young girls to reach for the stars," President Barack Obama said in a statement.
NASA Administrator Charles Bolden, a former astronaut, said Ride "broke barriers with grace and professionalism — and literally changed the face of America's space program."
"The nation has lost one of its finest leaders, teachers and explorers," he said in a statement.
Ride was a physicist, writer of five science books for children and president of her own company. She had also been a professor of physics at the University of California in San Diego.
She was selected as an astronaut candidate in 1978, the same year she earned her doctorate in physics from Stanford University. She beat out five women to be the first American female in space. Her first flight came two decades after the Soviets sent a woman into space"

A Doctorate in Physics, a writer, a Professor, and president of her own company. These are major accomplishments for anyone person and for a woman. She inspired young girls to go into science and mathematics when girls were routinely told; "Girls aren't smart enough for math, science why don't you become a __________ instead"

""Sally literally could have done anything with her life. She decided to devote her life to education and to inspiring young people. To me, that's such a powerful thing. It's extraordinarily admirable," said Maria Zuber, a professor at the Massachusetts Institute of Technology who heads the Grail mission"

Inspire she did. She will be missed, by her friends and family and by those she did inspire.

The truly sad discussion today is not: how much she will be missed or what legacy she leaves behind in girls, now women, that are pioneers in their own fields, but the discussion today is - why didn't she tell the world she was gay? It seems to answer itself doesn't it? She wanted to keep her relationship sacred, letting that part of her life become and oasis after stressful days of "being a pioneer for women" . She chose not to become a "poster girl" for other peoples agendas and for that I admire her.
The search engines have already switched from Sally Ride obituary, Sally Ride a legacy, to Sally Ride Partner, Gay Astronauts: Sally Ride's Death Highlights LGBT People In NASA.

I personally advocate rights for the LGBT community, legal, and spiritual. I am also for the individuals/couples right to choose how they live their lives in the community - quietly or loudly. No one else can make that choice for them. No one should.

Debra Kellerman
Posted by a small stone at 1:22 PM No comments:

First two days of GC 2012 Indianapolis Given that I'm not serving on a legislative committee here at GC 2012, my schedule is considerably more free, allowing me some time to post to this blog. I'm happy to share my impressions of yesterday and today (so far). Even though I've been to GC before (2003 in Minneapolis and 2009 in Anaheim), the uniqueness of this gathering still strikes me! As I was walking through the exhibit hall yesterday after getting my certification as a lay deputy, I was struck by the incredible variety of exhibits and exhibitors, as well as the all the bishops, clergy, laity, and visitors walking about, shopping and schmoozing. The image that came to mind was something like "Six Flags Over Canterbury" ... or perhaps more aptly, "Six Flags Over 815"! It's really quite fascinating! My two checked bags did not arrive with me at the Indianapolis airport Tuesday night (about 10:30 PM). But happily, they were delivered to my hotel room by 1:30 AM. Obviously, that made for a late night. But fortunately, my Wednesday morning schedule was quite open, which allowed me to sleep in a bit. Our first scheduled event Wednesday was the 2 PM opening gathering of the Bishops and Deputies (clergy and lay) in the House of Deputies (HOD) hall. We heard opening addresses from Presiding Bishop Katharine Jefferts Schori and the President of the HOD, Canon Bonnie Anderson, DD. We also got to experience one of many wild sport jackets worn by the Secretary of the HOD and of GC, the Rev'd Canon Dr. Gregory Straub. Rev'd Canon Gregory Straub's July 4 Sportjacket 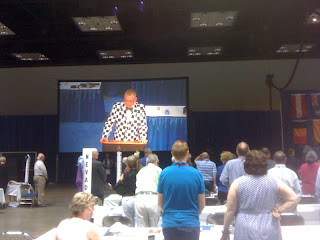 Canon Straub is known for his colorful jackets, a different one worn each day! (Today was plaid.) Then followed separate orientation sessions for both the House of Bishops (HOB) and HOD. After a hot walk (100 degrees plus here!) to a drug store, I returned to my room. At 7:30 PM, I attended a screening of two deeply inspiring movies, Out of the Box and Love Free or Die, presented by Integrity. Out of the Box is "a new, groundbreaking documentary about transgender persons of faith and their contributions to The Episcopal Church." Love Free or Die (a play on the state motto of New Hampshire) is "a new film about the life and ministry of Bishop Gene Robinson, including the struggles of TEC upon his election as bishop." Following the two films was a panel discussion that included four of the people featured in Out of the Box and Bishop Gene. I was deeply moved by both films and by the stories that were told in them. I HIGHLY recommend them to you! Out of the Box is easily available through Integrity (I was given a DVD of it), and Bishop Gene told us that one can visit www.lovefreeordiemovie.com and request a copy for a public screening. I'm hoping we can do this sometime soon in Wilkes-Barre. I was thrilled to meet Bishop Gene once again. My first GC in 2003 was the momentous year when we consented to his election as Bishop of New Hampshire. I was amazed, through that stressful time, by +Gene's incredible determination, reverence, poise, humility, and graciousness at a time when he was dealing with death threats and all kinds of baseless accusations, all before press people from around the world. His witness continues to inspire me, and I was deeply honored to have this picture taken with him. 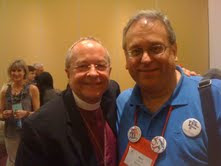 Bishop Gene Robinson with me at General Convention 2012 in Indianapolis This morning began bright and early (well, maybe early!) with a legislative session at 8:00 AM. Those who know me well know that I am most definitely NOT a morning person, so this was something of a sacrificial act! This first session was essentially a pro forma organizational session. With this completed, we moved to the grand ballroom in the hotel (JW Marriott) for our Opening Eucharist, with the PB as Celebrant and Preacher. To my great delight, the music was led by another one of my heroes, Dr. Marilyn Keiser, recently retired professor of organ at Indiana University in Bloomington, a gentlelady, a brilliant organist and church musician, and one of the true icons of our sacred music profession! Marilyn's fine parish choir from Trinity Church in Bloomington led the singing, and Marilyn, at the mighty Rodgers, was joined by a fine brass quartet. The music was beautifully chosen and performed, and the whole liturgy was elegant and inspiring. This was a great relief for me, particularly after the disappointments I had regarding the liturgies of the 2009 GC in Anaheim CA. After the final organ voluntary, Canon Anne Kitch and I went to greet the musicians, including Marilyn and my good friends Dana Marsh and Michael Messina, who are also involved in the music for this Convention. Dana, Michael, and I are all graduates of the Eastman School of Music of the U. of Rochester. Dana is now the organist & choirmaster at Christ Church Cathedral in Indianapolis, and Michael is organist & choirmaster of Trinity Church, Indianapolis. Both are brilliant musicians and great guys. It was so good to see them both, and I look forward to catching up with them and hearing their handiwork while I'm here! (An interesting aside, proving what a small world we live in ... Michael was the organist for Anne Kitch's wedding; they too are dear friends from even more years than I've known Michael.) At the moment, legislative committees are meeting, but I have time now to post here. Our next legislative session is from 4:30 to 6:30 this afternoon, and there are more committee hearings before and after that session. My dear colleagues in the Bethlehem Deputation who serve on committees have precious little time for blogging, so I feel a special obligation to write whenever I'm able. I'll be sharing more as the days progress. I want to say a huge THANK YOU to all of you who have supported my presence here. I covet your prayers. It is a great privilege to be here, and to share this ministry with Bishop Paul, our two representatives to the ECW Triennial, and all my fellow deputies from the Diocese of Bethlehem. Please continue to pray for us all. Warmly yours (truly!) ... Canon Mark Laubach to follow all the deputies posts from the Diocese of Bethlehem: http://diobeth.typepad.com/diobeth_gc_deputies_blog/
Posted by a small stone at 12:18 PM No comments: