Fr. Pavlac's day job is that of the Heerve A. LeBlanc Distinguished Service Professor and chair of the History department at King's College. I have just received a copy of his A Concise Survey of Western Civilization. I have read it in manuscript form, as have a number of our ordination track people, who would join me in saying that it is indeed concise, but also enlightening, well-organized, and not given to the pretense of relativism. That is, the author knows that perception is motivated by many things, and gives us not just data, but an account of human relating. The glossary is extremely useful and is a kind of mini-course in itself.

Now that this book is in printed form, we have a textbook for the pre-ordination process that not only meets the canonical requirements but is also a joy to read for everyone! You can find it on Amazon.

I think you will enjoy reading it.

Keeping the Homeless in Memory 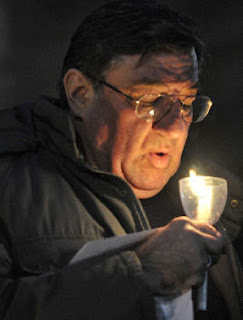 WILKES-BARRE – Losing his birth certificate in a house fire early in life and a paperwork mix-up when he was getting ready to retire led to Bob “Pinky” Shovlin becoming homeless at age 62.

Recalling the four years of his life that he had no home, while eating a cup full of chili in the hall of St. Stephen’s Episcopal Church on Tuesday night, was easier for Shovlin than thinking about the other local homeless people who have died recently, people who were his friends and family.

Just last week, his friend Peter passed away. His friend, Christian, died recently of sclerosis of the liver. And about a year ago, his son, Wayne, was killed when he was run over by a train in Huntington, W. Va.

Shovlin, 69 and a Wilkes-Barre native, was among a few dozen people who either are or were homeless or who work to help the homeless who gathered for a memorial service in the church and, afterward, a candlelight vigil outside.

Bill Jones, of Volunteers of America, welcomed everyone to the fifth Luzerne County Homeless Memorial Service, noting it was intentionally held on the first day of winter, the longest night of the year.

“As children of God, we all have a divine nature. And because of this, we all deserve respect, love and compassion,” Jones said.

Stefanie Wolownik of REACH and Mary Zack led a procession outside to a candlelight vigil. As they left the church, each participant picked up pieces of paper with names of the area homeless who died and formed a circle outside. As each person read one or more names, they blew out their candle.

When all the candles were extinguished, they filed into the church hall to share food and fellowship, thankful for warmth and the company of others on a cold winter’s night.
Posted by a small stone at 7:59 PM No comments: