From the Archives of St Stephens - by Tom Jones

“TO THE GLORY OF GOD AND IN LOVING MEMORY”

St. Stephen’s has a rich history since its founding in 1814 and its incorporation in October, 1817. During that time thousands of parishioners, wealthy and not, from all walks of life have passed through the doors of the parish, and many of them have been memorialized in various ways. The chancel of the present church built in 1897 contains several prominent memorials presented to the parish by families to commemorate loved ones. 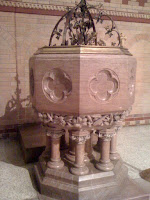 This particular memorial is the second memorial font presented to the parish. The original was destroyed in the Christmas Eve fire of 1896. The inscription at the base of the font reads:

Ruth Butler Conyngham was the third child of William Lord and Olivia Burr (Hillard) Conyngham. She was the granddaughter of John Nesbitt and Ruth Ann (Butler) Conyngham and Oliver Burr and Harriet Ann (Butler) Hillard. She was baptized on Thursday, February 24th, 1874 at the family residence by Rev’d Chauncey Colton, Rector. The sponsors/witnesses to the baptism were Charles Miner Conyngham, her uncle, and Mary Conyngham Parrish, her aunt. Ruth Butler Conyngham died from Scarlet Fever on Sunday, May 2nd, 1875 at the age on 19 months and was buried on Tuesday, May 4th, 1875 with services conducted by the Rev’d Dr. Henry L. Jones, Rector. Besides her parents, she was also survived by her two brothers John Nesbitt Conyngham, named for his grandfather, and William Hillard Conyngham. Interestingly, Oliver Burr Hillard, Mrs. Conyngham’s father, was also a long-time Vestryman and was a member of the committee charged with building the third church edifice in 1853. 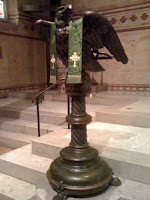 This reading desk, as it was referred to in an 1888 newspaper account of the reopening of the church after extensive renovation, is also a second memorial given after the Christmas 1896 fire. The inscription on the front of the lectern reads:

Lewis Compton Paine was born in Perth Amboy, NJ the son of Jedadiah and Phoebe Ann (Compton) Paine. His lineage dates back to Thomas Paine one of the original organizers of a company of Pilgrims who came to Plymouth, Massachusetts Bay Colony in 1621. Jedadiah Paine was a sea captain, and Lewis from an early age accompanied his father on voyages to the West Indies and the Caribbean, eventually becoming 2nd officer on his father’s vessel at the age of 14. In 1893 he came to Wilkes-Barre to work for Col. H. B. Hillman who was engaged in mining in Nanticoke. While here he met Mary Campbell Lee, the youngest daughter of James Stewart and Martha Campbell Lee. He contracted an illness that forced to leave the area and return to the coast.

During his convalescence he and Miss Lee married on September 19th, 1848 and took up residence in Perth Amboy. In succeeding years he became a purser on steamers traveling to Savannah and then for over three years on a new line which traveled to Chagres, Panama through the Isthmus. It was on one of these voyages that he heroically rescued more than a thousand persons stranded by a flooding river by running the first passenger train on the Panama Railroad, which was under construction.

When his illness returned, in 1853 he accepted an offer from his brothers-in-law Washington and Andrew Lee to form Lee, Paine & Co. to operate the old Lee mines. (Eventually, this operation became the Susquehanna Coal Company.) After they moved to Nanticoke from Brooklyn with their son William Lee Paine, Mary Lee died in childbirth. After her death he moved to Wilkes-Barre.

On October 15th, 1857, Lewis married Annie E. Lee, no relation to his first wife, the daughter of David Lee of Sycamore Grove, Tredyfferin Township, Chester County, PA. Serving as one of the executors of the will of Isaac Smith Osterhout, Lewis Compton Paine helped establish the free library, purchase the old Presbyterian Church to serve as temporary quarters, provide for the building of the Historical Society museum, and sit as one of the library’s first trustees. He and Annie had three children.

Lewis Compton Paine was confirmed on June 27th, 1863 by Rt. Rev’d William Bacon Stevens. He served on the Vestry in 1865, 1866, and then continuously from 1870 until his death in 1890. Upon the death of Judge Conyngham he became Senior Warden in 1874 and held that position until his death. He also chaired the committee charged with refurbishing, redesigning, and enlarging the church from 1883 to 1887. During his tenure as Senior Warden, the Rectory at 181 S. Franklin St. was twice enlarged and redecorated, a detached Parish House was built, the Log Chapel was erected, St. Andrew’s Alden and its Rectory were built, St. George’s Nanticoke was constructed, and St. Peter’s Plymouth received a new Rectory. In addition to the lectern, the Ascension stained glass window is a memorial to Lewis Compton Paine and Annie E. Lee Paine. 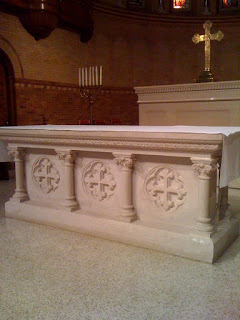 The present altar replaced a wooden table which served as the altar of the church when the first services were conducted on Christmas Day 1898. After the flood of 1972, the altar was moved from its place in the apse to its current location in the chancel. The inscription at the base of the back of the marble altar at the center of the chancel reads:

Charles Miner Conyngham was the seventh and youngest child of John Nesbitt and Ruth Ann (Butler) Conyngham. He was baptized on November 5th, 1840 by the Rev’d Robert Bethell Claxton and confirmed at St. Stephen’s on May 8th, 1866 by the Rt. Rev’d. Thomas Hubbard Vail. He was educated at the Protestant Episcopal Academy in Philadelphia and received an A. B. in 1859 and an A. M. in 1862 from Trinity College, Hartford CT. He studied law with G. Byron Nicholson and was admitted to the bar in August 1862, but he never practiced. He entered the army during the Civil War as a Captain under the charge of E. L. Dana, another St. Stephen’s parishioner, and held the rank of Major on his discharge. While in service, he fought in the battles of Chancellorsville, Gettysburg, the Wilderness, and Spotsylvania. He was severely wounded on May 12th, 1864 and was honorably discharged on July, 26th, 1864.

When he returned home from the army, he engaged in many mercantile businesses under the names of Conyngham and Paine, Charles M. Conyngham, and Conyngham, Schrage & Company among others. He was also active in coal operations with Conyngham and Teasdale in Shickshinny. Mr. Conyngham also served as President of the West End Coal Company and as a director of Parrish Coal Company and Hazard Manufacturing. Under the administration of Gov. Henry Hoyt he held the office of Inspector General of the National Guard. Notable among his community activities is his membership on the Executive Committee of the Luzerne County Bible Society.

This is the last verse of the song “If I Could Talk to the Animals” (Music / Lyrics by Leslie Bricusse) from the movie / musical Dr. Doolittle.

At St. Stephen’s we had our very own “Dr. Doolittle”, Father Daniel Gunn. Celebrating the Feast of St. Francis of Assisi we were given the opportunity to bring our pets to church for their annual blessing. This is a great opportunity for us to give thanks for the beautiful creatures God has entrusted to our care. Father Daniel has a special gift of talking to each animal in much the same way Dr. Doolittle did. Each pet was brought to the front one at a time for their individual blessing. Father Daniel placed his hands on their head, blessed them and thanked God for the happiness they bring to their owners. Father Daniel was able to infuse something personal into each blessing at times funny and at other times poignant. We celebrated new life in the form of a 3 month old St. Bernard puppy and gave thanks for a life slowly coming to an end in the form our Jack Russell, dear Abigail at 15 years and 3 months. Father Daniel had the foresight to save Abigail’s blessing for the very end. This St. Francis Day will always hold a special meaning for me as I think of Father Daniel’s kind words while he held Abigail on his lap. I am fully aware this will probably be her last blessing. While it makes me sad to think about this I am also grateful for the happiness, intelligence and courage she has brought to our family. Things won’t be the same once she is gone but she will always be in our hearts. It makes me realize that we need to love and care for these beautiful creatures more dearly since they are with us for such a short time. They are always there to comfort us and keep us company when we are feeling lonely or have had a rough day at work. Rather than yelling at them to stop barking, whining or scratching we should sit down with them and find out what is on THEIR mind. Maybe by doing this we can learn to “talk to the animals” in much the same way that Father Daniel / Dr. Doolittle are able to.

In closing I fully admit that I copied and pasted the following paragraph from the internet. It’s the last sentence I want to bring to your attention.

"St. Francis's attitude towards the natural world and animals, while poetically expressed, was conventionally Christian. He believed that the world was created good and beautiful by God but suffers a need for redemption because of the primordial sin of man. He preached to man and beast the universal ability and duty of all creatures to praise God and the duty of men to protect and enjoy nature and animals as both the stewards of God's creation and as creatures ourselves."


We are stewards of this earth and everything in it. It is our duty to take care of what God has given us and not to take anything for granted. Why not make St. Francis day everyday and give thanks for these creatures He has entrusted to our care.

Email ThisBlogThis!Share to TwitterShare to FacebookShare to Pinterest
Labels: Dr Doolittle, St Francis of Assissi, Talk to the Animals

a Whippet, several cats, and a puppy

What does a Whippet, a West Highland Terrier, a few cats, a St Bernard puppy and a Gecko have in common?

They all attended the St Francis day Blessing of the Animals at St Stephens today.
Along with a German Shepherd, Italian Greyhound, a couple of miniature Dachshunds and several other dogs of various breeds. All blessed today by Father Daniel, and although they were blessed today they are a blessing everyday to each and every one of their families bringing joy and relaxation to the humans that they care for and keep in line. No I did not say that wrong - I have a cat, she keeps us in line, making sure we tend to her needs and making sure our priories are in line;