Posted by a small stone at 4:16 PM No comments:

Make a video of your own at Animoto.

Posted by a small stone at 3:39 PM No comments:

Try our slideshow creator at Animoto.

Posted by a small stone at 2:35 PM No comments: 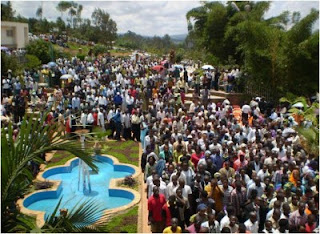 Genocide Remembrance Today in the church's proposed calendar we remember those who have died and who have been hurt by acts of genocide. Genocide is "the systematic and intentional destruction of a people by death, by the imposition of severe mental or physical abuse, by the forced displacement of children, or by other atrocities designed to destroy the lives and human dignity of large groups of people." (Holy Women, Holy Men, p. 342) Yesterday President Obama visited the U.S. Holocaust Memorial and Museum with Elie Weisel. Reports of their visit were moving. I am encouraged that last year the President established the Atrocities Prevention Board and announced a policy to make the prevention of atrocities a key focus for the U.S. There is now a structured way to monitor and report on current and potential acts of genocide. Too often our attention has been narrowed only by focus on our own vital interests. Genocide happens when the world averts its eyes and turns away. I tend to be one who favors diplomatic and police responses to international threats. I opposed the Iraq war from the outset. Yet I also tend to be one who wishes the U.S. would lead more prompt military responses in situations of genocide. I thought President Clinton was slow to respond to the ethnic cleansing in the Balkans. The success of that U.N. operation to stop the systemic murders is a reminder that the world can act to prevent and to stop genocide. I wonder how many lives might be saved if the U.S. and U.N. would act now with significant force to save the people of Darfur, South Kordofan and Nuba Mountains, and the Blue Nile from the atrocities and systematic attacks that have killed hundreds of thousands and displaced more than a million people. I am particularly proud of Dr. Sam Totten of Fayetteville for his tireless work and advocacy to prevent genocide, especially in and around Sudan. The prevention of genocide seems to me to be one of the few compelling arguments for military action. Can a criminal like Sudanese President Omar al-Bashir be that immune from superior military power? Elie Weisel reminded us that the civilized world failed to speak up and take measures to prevent the Holocaust of Nazi Germany, and he shown a light on the threats that Syria's Bashar al-Assad and Iran's leadership pose to the Middle East. Lower on the world's radar is the systemic cultural genocide that China pursues against the Tibetan and Uyghur peoples. I'm proud of the University of Arkansas' oral history project to capture the stories and memories of Tibetan refugees who recall their country before the Chinese invasion. And so today, we remember and we pray. Almighty God, our Refuge and our Rock, your loving care knows no bounds and embraces all the peoples of the earth: Defend and protect those who fall victim to the forces of evil, and as we remember this day those who endured depredation and death because of who they were, not because of what they had done or failed to do, give us the courage to stand against hatred and oppression, and to seek the dignity and well-being of all for the sake of our Savior Jesus Christ, in whom you have reconciled the world to yourself; and who lives and reigns with you and the Holy Spirit, one God, now and for ever. Amen. (from Holy Women, Holy Men) by Lowell Grisham on April 24, 2012
Posted by a small stone at 3:03 PM No comments: 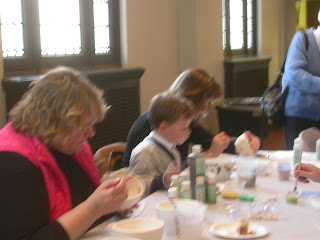 Next Sunday after the 10:30 service is our 5th annual Bowl Painting. Join us as we paint bowls and a few weeks later we will auction them off - money raised will benefit the Food Pantry at Reach of St Stephens
Posted by a small stone at 2:52 PM No comments: