I have to admit, when I found out that the Fair had not canceled last night's activities I was annoyed. I had been watching the 24/7 coverage for little over an hour (I had been watching it earlier but due to remote batteries dying -I shut the TV off, stuck on the shopping channel, it was a sanity move). Watching for even that short a time, my anxiety level was high, and anything that seemed frivolous was an intrusion, and not welcomed. During the news shut-off I was working on a power point presentation of all the events at St Stephens, than I watched more news. When it came time to pack up and head over to Dallas for the Fair my frame of mind was not pleasant to say the least. Crossing over the Susquehanna on the Cross Valley the view of the river swollen, expanded beyond the regular outlines was sobering. The levees were by and large holding, flooding existed but not to the level and devastation of Agnes, Floyd -or even Katrina. For that we can give Thanks, and in giving thanks - helping those that are facing extensive flooding in what ever way we can.
Once set up at the fair (internally quietly grumbling) people came by, seeming blithely unaware of the close brush and uncertainty of the flooding. And maybe they were but that wasn't the point of my being there. The point of being at the fair was to be a presence to the people that came to the fair. Just as we are a presence at 35 S Franklin Street, or at the grocery store, bookstore, work and wherever we are in our daily lives. To be where we are to where people are - physically, emotionally, spirituality.
When we are allowed back to 35 S Franklin Street (current predictions are late this afternoon to tonight) I will be there for the first service, and I will be there Monday morning to check out the food pantry and clothes closet, for any water damage in the basement - than our doors will be open, to serve those in need. Until than - I will be at the fair handing out balloons. Has my mood improved?
Yes, considerably, because to quote that great philosopher "Nobody can be uncheered with a balloon" 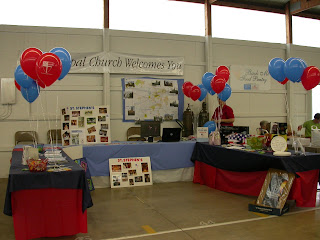