the Blessing of a Lifelong Covenant


A homily on the occasion of the Blessing of a Lifelong Covenant
For Matt and Tony by The Rev Daniel C. Gunn
May we seek Truth together in humility. Amen.
Wow, look at all these people. There must be 300 of you. Looks like anyone who has been to one of Tony and Matthew’s 12th Night Parties or been to WAC-ZIP at Stoddartsville over the last 8 years is all here.
They met online back before people would admit to using an online dating service. And of course Tony lied on his dating profile, I’m told, saying he suffered from “only-child syndrome” but it is “curable.” Matthew disagrees and is still waiting for a cure.
They did not have a very romantic first date. Matt had to drive from Williamsport. The date consisted of a grand tour of Tony’s apartment which was then cut short because Tony was also scheduled to give a walking tour of Hollenback Cemetery. Now that’s what I call romance.
On their third date, Tony invited Matthew to church (yet another romantic site) here at St. Stephen’s and they have been here ever since. In fact, I can’t imagine looking over and not seeing Tony in his Verger’s vestments, and Matt in his choir vestments.
The fourth date was the real test since Matthew and his miniature dachshund Sophie were a “package deal.” Tony had to pass the Sophie test, which he did, unfortunately, Tony’s Jack Russell Terrier, Abigail, never quite warmed up to Matthew (but Abigail certainly loved her new sister Sophie—oh how they loved.)
They modeled their courtship after Prince William and Kate Middleton – who also dated for 8 years before getting married, and you know they have a prominent portrait of the two in the apartment.
They shared much in common:
Everyone knows they love to throw parties – show hospitality in sharing their house and summer cabin – I’m sure they will be hosting 12th Night Parties for years to come
And they love the church. They sincerely believe the church brought them together and will keep them together. Matt has sung with the choir since 2005 and Tony is going on his 10th year as Verger of St. Stephen’s. I bought him his Verger’s gown because otherwise he looked like a lost choirboy.
They also share many other interests, but have one important difference:
First the common interests: they both love books, love to read, love history, love old movies and of course--the Oscars.
Yet they differ in politics, but here is where Washington could learn a thing or two from them; even though Tony is the Republican and Matthew is the Democrat they keep a truly bipartisan household.
Now that was the personal part, let’s talk a little theology.
I don’t usually entitle my sermons, because I still believe that the Spirit can move the preacher and change things. I preached part of this a few weeks ago, and the title I gave it for myself was “Wrestling with Triune God of love.” I still like that title because today—this evening—we’re wrestling with something new. I asked the sexton to check the roof because some believe it’s gonna cave in, but it hasn’t yet. Notice I said “YET.”
We are here today to wrestle with the concept of “Love.” Before I begin that let me show you an icon: it’s called “Christ and Abbot Mena.” He’s often called Abbot Minnow. 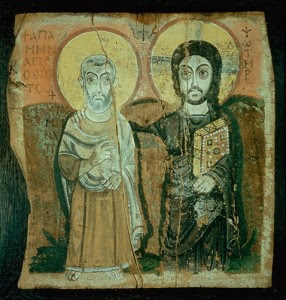 This image was discovered on a monastery wall in Alexandria, Egypt. The iconographer who wrote the image preserved one important aspect: he left the fracture. He left the fact that the Abbot was broken. I think that sends an important message: We’re broken people. Yet sometimes someone comes along and places an arm around us and helps us feel whole. That’s what Christ does to all of us, and that’s what happened to Matt and Tony. They chanced upon each other online and Tony was lying on his profile (according to them). Nevertheless, they managed to put an arm around each other and feel whole.
O wait. We’re here to do something different: Let’s talk about the challenge of love. The Trinity teaches us that. In my decade and a half of ministry there is something that I keep forgetting, and of which God keeps trying to remind me: the central tenant of the Christian message is love—God so loved that he gave, our first responsibility is to love God, and the second is like unto it, to love each other as ourselves. (Perhaps like the image?)
It is insultingly simple: God loved us, we are to love God and each other. One horizontal action of love, and one vertical action of love. That’s it. Anything more that we add to or expect of another is adding to or taking away from the Gospel, and John the Revelator said that the one who does that is in danger of eternal death. In other words, the one who muddies the fundamental message of the Gospel of Christ to love is in danger of going to hell. Woe to us preachers! So if love originates in God, then shouldn’t we look to God as an example of how to love? But yes, we just did—an arm around a broken person.
When we speak of God in three persons, the Trinity, we often speak in terms of Father, Son, and Holy Spirit. We might even use our bodies to pray that (making the sign of the cross). We often make the mistake of thinking that our nomenclature of Father, Son, Holy Spirit connotes a hierarchy—an ordering of importance. In truth, it implies relationship. The titles Father, Son, Holy Spirit indicate the connection between the persons of the godhead NOT the pecking order. Our need to name the persons of the godhead belies their connectivity, and just what is that bond that unites them? Simply put, it is love.
Jurgen Moltmann, obviously a German theologian, once wrote, “It is only from the perspective of the Trinitarian God that we can claim that ‘God is Love,’ because love is never alone. Instead, it brings together those who are separate while maintaining their distinct characters.” Moltmann’s claim is that we can only understand the concept of love and how to love because God’s chief activity is to love.
Take careful note of what Moltmann said, “Love is never alone. It brings together those who are separate while maintaining their distinct characters.” I think this is why Rublev’s famous icon of the “Hospitality of Abraham” is so poignant. It depicts the longing relationship between those people.
So let’s look at what we have: two distinct individuals who long to be with each other but do not consume each other with their desire to be together. They love and respect each other.
Rather than attempting to explain the doctrine of marriage, it would be better for us to embody what the Trinity does: respect diversity and difference within a loving union. Let me say that again: Respect each other’s differences within a loving union. Kind of sounds like a good definition for marriage or a family, or perhaps a church. Marriage is meant to teach us to respect our differences in a loving union.
The roof has not caved. Yet. Now we are going to celebrate with two people who found each other—cracked images—both—neither of you are the Christ in this image. You’re both the broken monk. You throw great parties (and Matt makes the best bean dip, if you’ve gone to a party, you know). Nearly 300 of us came here today to hear the next few lines.
So Matt, Tony, or is it Tony and Matt (I can never tell) come here now and say to the world what I know you’ve said to each other in private.

In these thoughts may we find truth. Amen.

Posted by a small stone at 3:50 PM No comments: