A Service of Choral Evensong 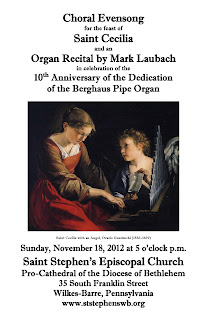 A Service of Choral Evensong for the Feast Day of St. Cecilia, patron saint of singers, organ builders, musicians, and poets will be held at St. Stephen's Episcopal Church, 35 South Franklin Street, Wilkes-Barre, on Sunday, November 18th at 5:00 PM. The Right Reverend Paul V. Marshall, Bishop of the Episcopal Diocese of Bethlehem, will preside. The Reverend Brian Pavlac, Assisting Priest of St. Stephen’s, will serve as officiant, assisted by Larry Hickernell, cantor. The Choir of St. Stephen's will sing under the direction of Canon Mark Laubach, Organist and Choirmaster. Music for the service will include works by Gerre Hancock, Robert Wylie Lehman, Charles Villiers Stanford, Herbert Murrill, César Franck, and Richard Strauss.

Following the service, Canon Laubach will present a 45-minute organ recital to celebrate the 10th anniversary of the dedication of the church’s magnificent Berghaus pipe organ. The recital will feature Johann Sebastian Bach’s Toccata and Fugue in F Major, BWV 540, Pastorale by the early 20th century French composer, Jean Jules Aimable Roger-Ducasse, and the Passacaglia from the 20th century American composer Leo Sowerby’s Symphony in G for organ.

An offering will be received to support St. Stephen’s “Polish the Gem” Organ Fund and Episcopal Relief and Development to provide assistance for those affected by Hurricane Sandy. Canned goods and other non-perishable food items are welcome in support of the church’s food pantry, and clothing will be gratefully received for the parish clothing closet.
Posted by a small stone at 12:02 PM