The Drama of Holy Week 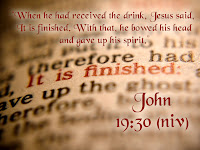 During Lent we live into a liturgical drama. We veil the cross to live as though there had been no cross, and we symbolically journey with Jesus to Jerusalem. During Lent we live intentionally naive of the victory over sin and death that Jesus accomplished for us upon the cross. This liturgical drama and journey to Jerusalem is intensified during Holy Week.

In Holy Week we stand as pilgrims and witnesses of Jesus in Jerusalem. On Palm Sunday we join in the drama as we wave palms in our procession into the nave of the church crying "Hosanna!" But as the day is intended to reflect, we soon learn of Jesus' fate. We hear the passion of Jesus read. This is why we leave church in silence on Palm Sunday- we know Jesus will die.

Our liturgical drama is than acted out during the following days leading up to Easter. It is tradition in most parishes to offer communion on the first days of Holy Week, as we do on Monday and Tuesday. On Wednesday we mark the day with Tenebrae. Though we do a shortened version of the service, it is intended to foreshadow the days to come. After each Psalm a candle is extinguished until only a single candle remains burning. That candle is then hidden to symbolize the death and burial of Jesus. The single candle is returned to its place. The entire church is dark, and everyone leaves in silence to contemplate the mystery of the evening's liturgy.

On Thursday we begin what is called Triduum (TRIDD-oo-um; Latin triduumsacrum,sacred three days). These three days re-enact the passion, death and resurrection of Jesus. Thurdsay in Holy week is called Maundy Thursday, which is derived from the Latin term mandatum whic means "commandment." On this day we re-enact the evening when Jesus instituted the Last Supper, which we called the Eucharist or Holy Communion, but we also follow his commandment to be servants of one another by washing each others feet. This humbling act recreates the evening when Jesus laid aside his pride and proved himself to be the servent of us all. When we wash one another's feet we are following his command.

Maundy Thursday continues with the Agape meal. Agape is the Greek word for love. Literally an Agape meal is a re-enactment of a "love feast." The earliest Christians were Jews. The Agape was intended to resemble a Jewish Seder. We eat soup, bread and other foods and drink wine. We say prayers over specific items of the dinner. The meal is intended to be festive, yet somber at the same time. The feast ends as we process back into the church where we witness the stripping of the alter.

We strip the alter and we remove all items of comfort. This stripping is intended to remind us of the evening when Jesus was apprehended as a common criminal. The kneeler cousins are removed, as are the seat cushions at the alter. The holy vessels are purged, and the Holy Oils used for anointing the sick and the newly baptized are poured out onto the ground. Even the cotton used in the oil stock is burned. The alter is washed as one would wash a body after death. Finally, the remaining bread and wine, the body and blood, are carried to the Alter of Repose where we begin the Minor Vigil. It is called the Minor Vigil to distinguish it from the Great Vigil. The Minor Vigil is intended to put us in mind of sitting in vigil with the deceased. The reserve Sacrament is placed on the Alter of Repose and hourly we light candles until the point when the sacrament is removed form the alter for Communion on Good Friday.

Good Friday is the only day of the year when we are forbidden from celebrating the Eucharist. On this day we receive Communion from the "Pre-sanctified" or Reserve Sacrament, meaning that which was consecrated the evening before. On Good Friday we also "Venerate the Cross." That is the act whereby we pay respect to the work Jesus accomplished for us on the cross. Everyone is invited to come forward to the cross to offer a brief prayer or thanksgiving. Most people will kiss the cross or at least touch it. In so doing we acknowledge that the cross that was veiled for the Lenten Season has been reveiled, and with it we learn of the fulfillment of Jesus' mission. After Communion we leave in silence.

By the time we reach Saturday we are into the third day of the Triduum. Most people think that Easter Sunday is the principal celebration of the Christian year, but that is not historically the case. The Great Vigil historically developed as the chief celebration of the Christian Year. Originally intended to be a vigil from sundown to sunrise, we now celebrate it in a shortened fashion realizing that few people could tolerate such a lengthy service.

The Great Vigil begins with the kindling of a new fire, meaning that we build a fire outside the church with everyone gathered around. We light our lanterns from the new fire as we process into the church. During the first part of the liturgy we hear readings from the Old Testament and the Psalms. If there are converts to be baptized, Confirmed or Received it is done during this time. Bear in mind Confirmation and Reception must take place before the bishop. All of this takes place in the darkness to symbolize our time before Christ when we lived in darkness. Then with a loud noise to recreate the rolling away of the stone from Jesus' tomb we sing "Alleluia!" The light is restored to the entire church. {By the way, everyone is invited to bring their own noise maker for the time of the "great noise.") From this point the celebration proceeds as any typical Sunday Eucharist. Thus ends the Triduum.

Many who attend these Holy week liturgies are very moved by the symbolism and drama. Over the years I have known more than a few who have left these services in tears. What is most fascinating to me is that Christians all over the world participate in these liturgies, and we have for hundreds of years. Through the numbers are growing, few churches celebrate the liturgies of Holy Week. It truly is a liturgical drama to witness, and as a witness you become a participant in these liturgies. You become the spectator in the crowd witnessing the trial, crucifixion, death, burial and resurrection of Jesus.


Please join us this Holy Week (March 28- April 4) as we journey with Jesus.