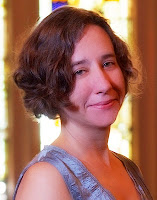 Renowned concert organist Susan Jane Matthews will perform an organ recital at St. Stephen’s Episcopal Church, her hometown of Wilkes-Barre this coming Sunday, April 18, 2010 at 3:00 p.m.. Dr. Matthews has performed throughout the United States and in Europe, including solo organ recitals at the Washington National Cathedral; St.-Sulpice, Paris; and the Himmerod Abbey, Germany. The Wilkes-Barre recital is among several performances scheduled during this summer: San Francisco and Oakland, California; Trier, Maria Laach, and Großlittgen, Germany; and London, England. She has been featured on the radio programs Pipedreams, Organ Loft, With Heart and Voice and Music from St. Stephen's

She is currently Director of Music at St. Paul’s Episcopal Church in Burlingame, California where she serves as organist, director of the Chancel Choir, and founding director of the St. Paul’s Choir School for boys and girls, the latter affiliated with the Royal School of Church Music. She has served as Director of Music at St. Michael’s Episcopal Cathedral, Boise, Idaho and as Principal Organist of Grace Cathedral, San Francisco. During her four-year tenure at Grace Cathedral, she recorded frequently with the Cathedral Choir of Men and Boys and in September 2004, Gothic Recordings released her first solo organ CD, Chosen Tunes from Grace Cathedral.

A free-will offering will be received at the recital.
Posted by a small stone at 5:36 PM